On the morning of the 5th of October 2015, the 115th birthday of the implantation of the Portuguese Republic (5th October 1910), one of the bank holidays that have been eliminated by the centre-right government during the troikian period, the Portuguese woke-up with an expected autumn rainy day and a taste of sweet and sour in their mouth. Portugal re-elected the centre-right Portugal Ahead coalition formed by the ruling Social Democrats (PSD) and Christian-Democrats (CDS/PP) responsible for negotiating and implementing the bailout. The question in everybody’s mind is why Portuguese voters have not sanctioned at the ballot box the executors of the austerity measures responsible for their hardship in the last four years? Moreover, why in clear contrast to other countries (e.g. Italy, Greece, Spain) where austerity policies have favoured the formation and electoral success of totally new parties (e.g. Five-Stars Movement, ANEL, Podemos), no new party (e.g. Democratic Republican Party, Free/Time to move Forward) managed to enter parliament? Indeed, the stability of the Portuguese party system is so remarkable that the post-authoritarian history of Portugal’s party politics can still be retold with no more than four or five party-names: the Socialist Party (PS), the Portuguese Communist Party (PCP) and the Left Bloc (BE), together with the two above-cited political formations. The answer to these questions is not straightforward, by the very simple fact that voters have demonstrated a mixed feeling regarding the incumbent’s performance in managing the economy. The results show a divided electorate when it comes to blaming and punishing the incumbent for austerity and that, as it has been demonstrated elsewhere, has partly to do with the general perception that the Portuguese government has limited margin of manoeuvre to take decisions autonomously from global economic trends or the will of larger countries. Size played in favour of the government coalition: while it is true that the Portuguese economy suffers from the lack of buffers and leverage to respond to external risks; it is also true that the smaller the country the less likely that its citizens will make their governments solely responsible for the negative repercussions of economic conditionality. 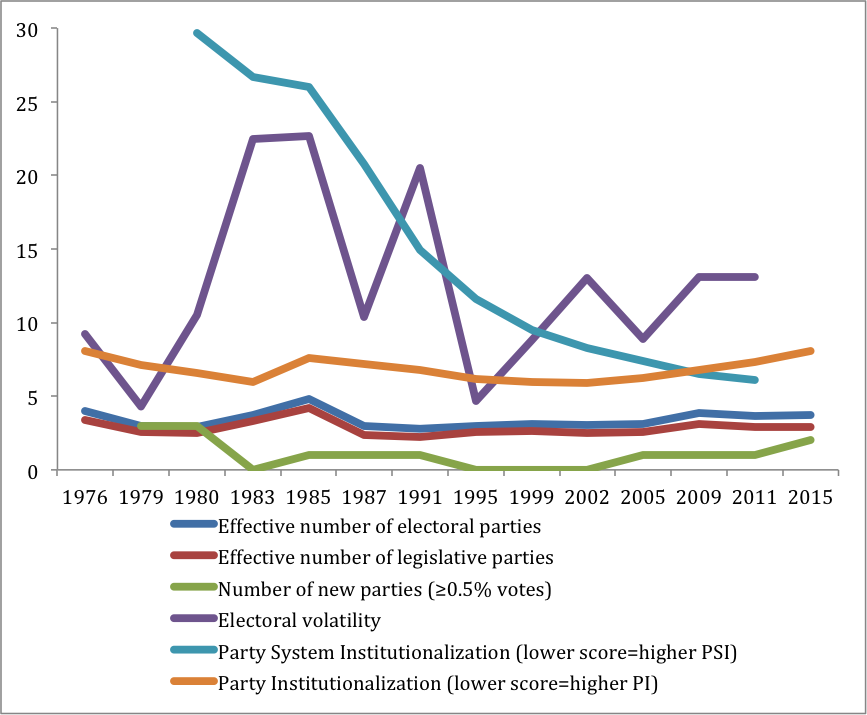 The results were a clear-cut victory of the centre-right coalition, but not a landslide victory and this will raise some doubts regarding future governability. The centre-right (i.e. PSD-CDS/PP) was short of 12 seats to have absolute majority in parliament: it won 104 against an aggregate of 121 seats from the three centre-left parties (PS, PCP and BE).[1] In other words, the centre-right coalition has to govern with a centre-left majority in parliament. However, whereas coalition platforms have been possible at the right of the political spectrum, in the left side, these have not been able to obtain until now.

The centre-right coalition will be invited by the President of the Republic to constitute a government, but it will most likely suffer pressure from the centre-left when adopting major structural reforms, such as additional pension cuts and stringent social benefits. Whilst the government coalition proudly claimed that they had gone way beyond what had initially been agreed with the international creditors, as an attempt to send a positive sign to the financial markets and distance itself from the Greek turmoil, such unilateralism is less likely to happen during this legislature. The centre-right coalition knows that it needs to negotiate with the Socialists if it wants to get the budget approved in parliament. There are a key number of measures regarding job creation/protection and corporate responsibility in the electoral manifesto of the Socialist party that may be acceptable to the new centre-right government. The need to create conditions for governability may have immediate implications regarding the new cabinet formation. The ruling coalition could opt to refresh its team by inviting a few consensual figures for key portfolios, but this seems highly unlikely in the early stages of the new government. The space for cross-party agreements on legislative matters will also depend on who will take over the leadership of the Socialist party following Costa’s electoral defeat. The left, on the other hand, has veto capacity, but the likelihood of forming a common front in scanty due to the weight of history and the ideological distance between the moderate Socialist party and the more “radical left” parties, in particular regarding Portugal’s obligations towards international creditors and its future in the monetary union. Notwithstanding an overwhelming majority of voters support the idea of a centre-left coalition, and as Freire and colleagues have maintained ‘this position is not so clearly reflected in the thinking of the left-wing party elites, who are not much convinced in a hypothetical alliance, which is particularly true among the communists’.

The economic crisis not only increased polarisation of the party system regarding socio-economic issues, it also shifted electoral competition to the left of the spectrum. The opinion polls carried out prior to the elections sent out clear trends to both the contenders and the voters. The centre-right capitalised on the slightly positive economic upturn that started to be experienced during the second term of the legislature and were able to contain the loss of discontented traditional voters, affected by the austerity measures, to the left. Facing fierce criticisms from segments of its party elites, for being obtusely ideological in the way it addressed (welfare) state reforms, the Social Democrat leadership reminded the electorate, on various occasions, of its social justice foundations, in an a desperate attempt to whitewash its neoliberal façade. The Socialist leadership not only failed to win votes at the centre with its worn-out “bota-abaixo” (bashing) discourse that did little “to regain the confidence” of the undecided median voter (the Socialists’ campaign slogan), who opted largely for abstention, it also lost votes to the left (mainly Bloco de Esquerda). In sum, the Socialist party failed to capitalise on discontent with the incumbent for a number of reasons: the mediatisation of the Socrates affair; a negative perception of the PS’s legacy in handling the economy – in particular, the high public debt as percentage of GDP ratio, rising unemployment figures and clientele-driven public investment; a few tactical mistakes (such as the “faked people” posters episode) along the way; and the contestation of the party leadership prior to the elections, which did not go down well with a few traditional voters. For the first time in the history of the Portuguese democracy, a party leader who won two consecutive elections, during an adverse political context and with little support from the party elites, saw its leadership contested internally on the grounds that he had not been able to capitalise on the overall mood of discontent with the incumbent. Replacing António José Seguro, who had a more consensus-building posture than Costa, a few months away from the general elections, was an unwise move, as the campaign dynamics finally proved.

As clearly shown in the graph illustrating this post, since 1987 the Portuguese party system, characterized by relatively low levels of parliamentary fragmentation and electoral volatility as well as the political alternation between the two main parties (i.e. the socialist PS and the centre-right PSD) in either stable single-party or two-party coalition majorities, has remained extremely stable. This being said, ‘in the past few years (and more intensely since 2009), aggregate satisfaction with democracy has plunged to the lowest levels ever recorded in Portugal’ and political participation, in all its forms, is well below the average of other EU countries. Not surprisingly, Sunday’s parliamentary elections registered a record low turnout of 56.9 per cent, only comparable to other new EU democracies in post-communist Europe (e.g. Poland, Lithuania, Romania). Contrary to what has happened in other southern European democracies, the economic crisis has not ignited citizens’ engagement in political issues. ‘With the exception of protest activities, most types of political participation acts do not show relevant increases in prevalence. In other words, the conceivable pressure towards greater involvement in politics brought about the dissatisfaction with the economic and political conditions seems to have been largely countervailed by the resilient syndrome of political disaffection that still prevails among the Portuguese citizenry’.

These elections brought to the front a clear division in the Portuguese society that may regain intensity and momentum during the next presidential elections and with clear implications for the future leadership of the Socialist party. The social media publics are divided in two camps: on the left, comments highlight a sense of bitterness and disillusionment with the short memory of Portuguese voters, who seem to suffer from a kind of Stockholm syndrome; right-of-centre supporters claim that voters are not stupid, and have rewarded the government for timid yet clear signs of economic recovery. Beneath this superficial tensions, common in polarised party systems and highly disputed electoral competitions, lies a more deep-seated ideological cleavage: between those who are supportive of the welfare state as a catalyser of economic and social progress, and those who believe that the country’s competitiveness can only be achieved by rolling back the state.

Fernando Casal Bértoa is a Research Fellow at the University of Nottingham. Luís de Sousa  is a Professor Auxiliar  at the Universidade de Aveiro. This article was first published in the Who Governs Europe database and can be found here. Image credit: CC by দেবর্ষি রায়/Flickr.