London Matters for the BNP, But Prospects Look Bleak

For the British National Party and Nick Griffin, the forthcoming elections in London mark an opportunity to stage a comeback. Taking place against the backdrop of withering electoral fortunes, and a recurring bout of factionalism, the elections signal a chance to put the bad blood to one side and begin focusing on the not-too-distant campaign to save at least one of two seats in the European Parliament. They might not admit it, but the London elections mean a lot to the fledgling party.

As Griffin will be all too aware, signs of an electoral revival (whatever its magnitude) would provide him with ammunition to throw at internal dissenters (of which there are now many). For the party a successful campaign would help reignite morale among weary and pessimistic foot soldiers, and perhaps give voters the impression that the thirty year-old party is not quite yet a busted flush.

In a strange sort of way, the BNP has now come full circle. It was born in London, and it was in the capital where the party spent most of its youth attempting to achieve the elusive breakthrough. But today, the party finds itself putting all of its remaining chips on a region of the country that has since become one of its weakest, and which the party had largely abandoned as something of a lost cause. Following the election of Griffin as BNP Chairman in 1999, and the subsequent announcement that votes were the new priority, the party moved its quest for votes northward, toward areas such as West Yorkshire and Pennine Lancashire. As we showed in an academic study of the BNP electorate, whereas the 1970s National Front (NF) had been strongest in London (notably the inner East End), support for its successor did move decisively north in line with this strategy. At the same time, activists and organisers from the inner East End began to decamp to areas in the outer-east, such as Barking, Bexley, Broxbourne, Dagenham, Epping Forest and Loughton. Even Griffin confessed to me during one interview that inner London was practically ‘out of bounds’ for his activists, who could no longer leaflet safely in areas such as Tower Hamlets.

For these reasons, it is interesting that the BNP is now counting on London for its electoral resuscitation. At the coming elections, the party is delivering its usual message to foot soldiers. ‘The people are waking up at last!’, exclaims one e-mail to supporters. ‘Now is our time to lead!’ Donations from these weary supporters have, the party claims, funded half a million special edition newspapers, over 500,000 ‘I Love London leaflets’, the running costs of the BNP’s ‘truth truck’ that has been touring key areas, activist teams and other literature that is being used to promote the BNP Mayoral candidate, Carlos Cortiglia, and offer voters a more ‘positive’ combination of policies. The target, it explains, is to ‘hit a total of one million voters in our best London wards’.

So, exactly what would a BNP-run London look like? Increased powers for the GLA. The ending of the congestion charge. No more residential permits. Reduced taxation. More staff for the Underground (and free travel on it during weekends). Free bus and train passes for  pensioners. No runway at Heathrow. Zero-tolerance approaches to anti-social behaviour, gang culture and violent crime. Five-year sentences at a minimum for knife crime. No ‘politically correct interference’ in policing . Raised intellectual and physical requirements for police recruitment. Improved recycling facilities. Introduction of more solar panels; and more housing. Anyone notice anything? At least in its public outward-facing message, the BNP is clearly attempting to focus on more voter-friendly and positive themes. It is only halfway through its manifesto that the ‘I’ issue crops up (‘we’ll shut the door!’). 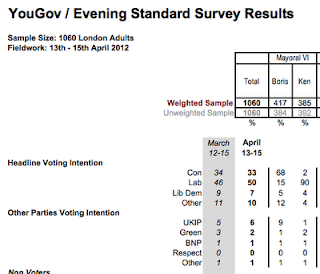 Do voters seem attracted by the offerings? No, not really. As I demonstrated in a book last year, unlike the far more successful radical right brand on the continent, the BNP has consistently failed to attract a broad and stable coalition of supporters. Instead, it fell dependent on a dwindling base of older, working class men who lack formal educational qualifications – hardly the stuff of an enduring electoral base. And, according to the most recent YouGov poll on the Mayoral contest the BNP’s prospects have not improved. And that is despite a financial crisis, cuts to local services, continued public concern over immigration and enduring dissatisfaction with the main parties.

According to YouGov, the BNP is currently polling around 1%, which is a drop of 4 points on its standing at the time of the last elections in 2008, and would mean no representation on the GLA. Moreover, unlike 2008 the BNP has found the wind taken out of its sails by a declining membership, competition from the EDL, lingering financial worries and a seemingly revitalised UKIP, the latter of which has even got some serious voices on the centre-right talking-up its electoral prospects.

As Griffin is no doubt aware, failure would almost certainly fuel his grassroots rebels who argue he can no longer deliver success. This will mean that more activists may jump ship to rival groups like the English Democrats (even Griffin has been forced to remind supporters that the EDL is actually a proscribed party), the EDL or withdraw from political activism altogether. But one thing is clear: without signs of an electoral revival Griffin is captaining a sinking ship. If the BNP steps out of these elections without representation, which in my view is likely, then it may well continue to downplay its once-heavy focus on the ballot box strategy. Within the BNP (and indeed Griffin himself), there has always been a school of thought that has prioritised street-based confrontation over electoral campaigns. If the London campaign fails, it may be that we will begin to see more of this ‘direct action’ (think EDL-style demonstrations, albeit with significantly fewer followers). Bizarrely enough, this might happen just at the moment that the EDL begins to move toward elections.