Radicalisation in Bosnia: old wounds reopened by an emerging problem

Bosnia experienced a difficult reconstruction process after its 1992–1995 war. Now its ongoing political and economic crisis is making it harder to respond to a growing global problem – radicalisation.

According to recent reports, Bosnians have been travelling to Syria to fight for radical Islamist groups in increasing numbers since 2012. They now constitute one of the largest European foreign fighter contingents as a proportion of national population. Figures from 2015 suggest there are more than 300 Bosnians in Syria.

There have also been a number of low-level incidents of terrorist violence in Bosnia. In April 2015, for example, a 24-year-old man from an area near the town of Zvornik drove into a police station and opened fire. He killed one officer and injured two others before being shot dead.

This has prompted heated debates about how to handle the problem without feeding into the tensions that pervade in Bosnian politics. Of particular concern is the possibility that decisions about security will be coloured by ethno-politics.

The Bosniak-Croat Federation covers 51% of the territory and the mainly Bosnian-Serb Republica Srpska covers 49%. Each has its own president, government, law enforcement and other political bodies.

After the war, the aim was to give equal representation to Bosnia’s three constituent groups (Bosniaks, Bosnian-Serbs and Bosnian-Croats) at all levels of government. To make sure that happens, there is also a central government with a rotating presidency. 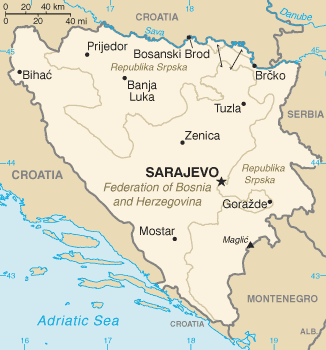 This arrangement has embedded ethnic division into the country’s political system. It has created obstacles to sustainable peace, state efficiency and positive political dialogue between the ethnically-oriented political parties.

Bosnians can’t help but wonder if the weak economic situation that seems to have ensued from the political stagnation is driving many people out of the country and into Syria. The official average unemployment rate for 2008 was 24% and for those aged 15 to 24 it was 47.5%. It has been estimated that current youth unemployment is around 45% to 50%. Those departing for Syria and Iraq are offered housing and support to relocate with their families.

According to local NGOs, the first departures were motivated by humanitarian concerns, as Bosniaks wanted to help fellow Muslims fight state oppression. But more recently, they have been joining the ranks of Islamic State.

Some are war veterans who fought with the Mujahideen in the Bosnian war while others are men with military skills and war experience. Then there are young, unemployed Bosnians driven by the need of group belonging and attracted by the financial support on offer.

An IS propaganda video released in June 2015 called on Bosnians to carry out terrorist attacks at home. But even prior to this video, attacks were being reported in Bosnia. In 2010 a bomb exploded at a police station in the town of Bugojno, leaving one officer dead and several injured. The attack was apparently part of a drive to establish sharia law in the region and to hurt Bosnian Muslims who took a different view of Islam.

In 2011 a man fired shots at the US embassy in Sarajevo. His accomplice, although acquitted, was later confirmed to have died as consequence of a suicide mission in Iraq. In November 2015, an attacker by the name of Enes Omeragić shot dead two Bosnian soldiers in Sarajevo before dying himself in an explosion at his home.

Some of these attacks have been connected to the town of Gornja Maoča in north-eastern Bosnia, known to be a base for foreign and domestic Wahhabis – followers of a particularly conservative sect of Islam. This village is said to be an operational ground for IS training camps and a centre for planning terrorist attacks. It is constantly being raided by the authorities. Weapons have been confiscated and arrests made. In 2015 several news outletsreported seeing IS flags and iconography around the village.

Divided over a shared problem

The response to the growing problem of radical terrorism at home has shown just how divided Bosnian politics remains.

On the same day, Zeljka Cvijanovic, prime minister of Republika Srpska, held a meeting on increasing security and preventing retaliatory attacks from the Bosnian-Serb population against Bosniak property.

Meanwhile, Serb authorities were using the attack as evidence of the need to investigate Bosniaks in their territory. A new Serb police squad was established and raids carried out at 32 locations. In response, Bosnian political leaders accused the Bosnian Serb government of using counter-terrorist measures as a form of intimidation against non-Serbs living in Republika Srpska.

Concern has grown ever since that the Bosnian-Serb anti-terrorist operations are not communicating or co-operating with Bosnia’s state institutions. Some believe Dodik is tightening security in Republika Srpska as a way to introduce a separate intelligence agency. That could, in turn, be seen as a push towards the dissolution of Bosnia.

In late 2015, Bosnian security minister Dragan Mektić announced a new operational group to guarantee cooperation and information sharing between security, intelligence and police agencies in Bosnia. This group was presented as part of a national anti-terrorism strategy that would improve investigations stalled by the fragmented judicial and security systems in the country.

But there has been opposition from authorities in Republika Srpska, which see the group as a threat to the balance of powers between political institutions in the country. They argue that the group would enable the Bosnian Ministry of Security to bypass other agencies in counter-terrorism investigations.

And in Bosnia that matters. This is a country divided and with many challenges still emerging as it rebuilds. Dealing with the problem of radicalisation is proving difficult even for countries without such a history. Enduring tensions just make the job that bit harder.

Louis Monroy Santander is a PhD student of International Development Department at the University of Birmingham. This article was first published on The Conversation and can be found here. Image credit: Wikipedia Commons.